… there should be an optimum for multiple wing sizes. The main drag we are fighting at lift off speed is induced drag. Here is the are the drag shares versus speed: Lift Coefficient ~ Angle of Attack (as long as we do not stall, this also depends on the airfoil selection)

I think one little wing operating at high Angle of Attack (–> high lift coefficient --> high induced drag) might have a drag penalty. All wings should have similar lift coefficients. We also need aspect ratio, so the second wing for helping lifting up the foil should not be too small. Calculation/Optimization for this can be done using XFLR5
… I am looking forward to posts of someone, who tried this…

Hi @flyingchris, Thanks for sharing your knowledge with us! Here is a link you may be interested in about a hydrofoil boat with a large main wing that retracts and allows a smaller wing to take over. The basic idea is the same as what you’re talking about to get the boat out of the water with less power.

Also, here’s something I learned recently about an improvement to the elliptical lift distribution where it should actually be a bell curve to reduce induced drag. This was discovered by a NASA scientist. I hope you find it interesting. I’m curious what you think because of your experience in aerodynamics.

Hey Chris, don`t take all the conclusions from aerodynamics into hydrodynamics. Pay attention that we are operating with surf hydrofoils at Reynolds Numbers of about1-400000…and not at Reynolds numbers above 1 million most profiles are made for:wink: Even most of the big companies kitefoil designers walk in the dark at this point:sweat_smile:
On the other side even a flat board does elevate at a certains speed. But if you want the best in regards of performance, yes a good front wing is necessary…

And for the prop design, always keep in mind… cavitation starts around rel. velocity of 14m/s…

The motors maximum Ampere is 93A. At 11km/h we would get 3500RPM, which would match 10Volts. --> Power: 930W which should be enough when the board and propeller are selected having high efficiency in mind (?)

There are two problems: 350KV means no load RPM, so at 10V you might get 3500RPM only without prop. The real RPM might be up to 1/3 lower (assuming 10V are in the voltage range of the motor, it could also be that a 130V rated motor doesn’t even turn on at 10V), and the second: you can’t calculate like, 10V * max amp => maximum power. The motor draws up to 93A at a certain RPM, load and voltage. There is a curve or matrix for every motor for those parameters in dependence of each other, similar to the graph you started the topic.

@Gliderpilot thx, very interesting “flying samurai” video. Supports my hope that our small motor will do the job.
About the bell shaped lift distribution:

Here is a picture showing the Re-Effect (drastic example). At small Re-Numbers there is a larger performance drop than for higher Re-Numbers when chord (~Re) is reduced. Here is an update on the fuselage. We probably oversized its stability a bit. The initial idea was that we need a wide connection, because of the larger wing span. Furthermore we have two mast positions (3 holes for 2 screws) Did you hear about a “Gurney Flap”, they are used by race cars to increase the pressure of the spoilers. Airbus now uses them to have an adaptive wing/ lift control during the flight and takeoff (usually you use the “real” flaps for slowing down while/after landing by destroying the laminar flow).
It’s just a tiny angle at the end of your wing profile. Gurney Flap

Gurney Flap, Super cool concept, thanks for that link! It looks like we’ve both started hydrofoil projects with the same goals in mind. My goal is to power out and catch storm waves as I imagine powering across a flat lake will get boring fast. I find those sit down jet ski’s boring after a couple minutes and certainly doesn’t feel like a “sport” I’m also designing a similar project and have done several test with varying degrees of success and will have my build up here soon. One comment I would make is I don’t think you need to get crazy worrying about board drag. My only goal there is to have the board as small, light and stiff as possible! 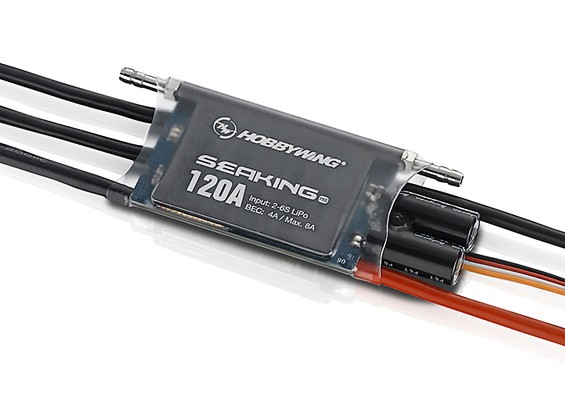 The Hobbywing Seaking Pro 120A is designed specifically for racing boats especially the ECO / MONO1 / other competition boats (<=1000mm). The Pro 120A is lightweight for marine competition which helps with speed and endurance. It comes with... Very nice Chris! Seems like your ESC only supports up to 6S, are you going low voltage?

Looking good. Did you CAD design the foil yourself ?

Hey Chris, did you test things running with 14.8v yet? I’m curious the current draw and results with that motor and ESC?

Mast connection was adapted in order to fit the Slingshot mast: Looks nice, hope it works out well for you.
Are you water cooling that with rubber tubing or using the large aluminum tube as a heat sink?
That ESC seems really small at only 120A and using 12AWG wiring. It’s going to run hot, be sure to put a breaker between ESC and Batteries to try and protect batteries if things overheat and meltdown.

Hello! Any news on your project?
Can you share your wing model?

Loved your post! Are you still using this forum? I’ve done a foil design addin for Fusion 360 and I’m looking for an engineer like yourself to check if it looks OK…

Looking for an engineer to check my hydrofoil math Foils & Boards

I’m putting the finishing touches to a Fusion 360 add-in which computes ideal foil sections. It is based on particle-swarm-optimisation (thousand of machine hours of genetic improvements) Are there any engineers here who might like to look at where I’m upto and tell me if I’ve left stuff out, or if anything looks wrong? The input panel & main program look like this (it does air and water, foils and props): [Airfoil_Tools_Screenshots]

Hi Chris @cnd,
the screenshot of the plugin you shared looks very promising

I studied mechanical engineering with a focus on aircraft systems and work as an power plant engineer in the overhaul business.
That beeing said, I’m not an expert on aerodynamics and propeller design but have a decent understanding on what’s going on in general.

I’d be interested to try it out and provide some feedback. Is the plugin available yet?
Cheers, Nik

Looking for an engineer to check my hydrofoil math